Beyond Diamond Creek, along the same road, is my next favorite Kalmiopsis Wilderness campsite and swimming hole: Sourdough Camp. The old mining camp is a long drive up a very long and bumpy four wheel drive road, and like Diamond Creek, holds some very positive healing power in my opinion.

The road used to go all the way to Sourdough Camp, but in the last decade or so, some big boulders have been placed in the way, establishing a sort of parking lot before what used to be a “lower water” bridge. So we parked and grabbed some of our gear and began hiking up the old road to the camp, to what I remember as a pretty amazing swimming hole where Chrome Creek dumps into the Smith River. 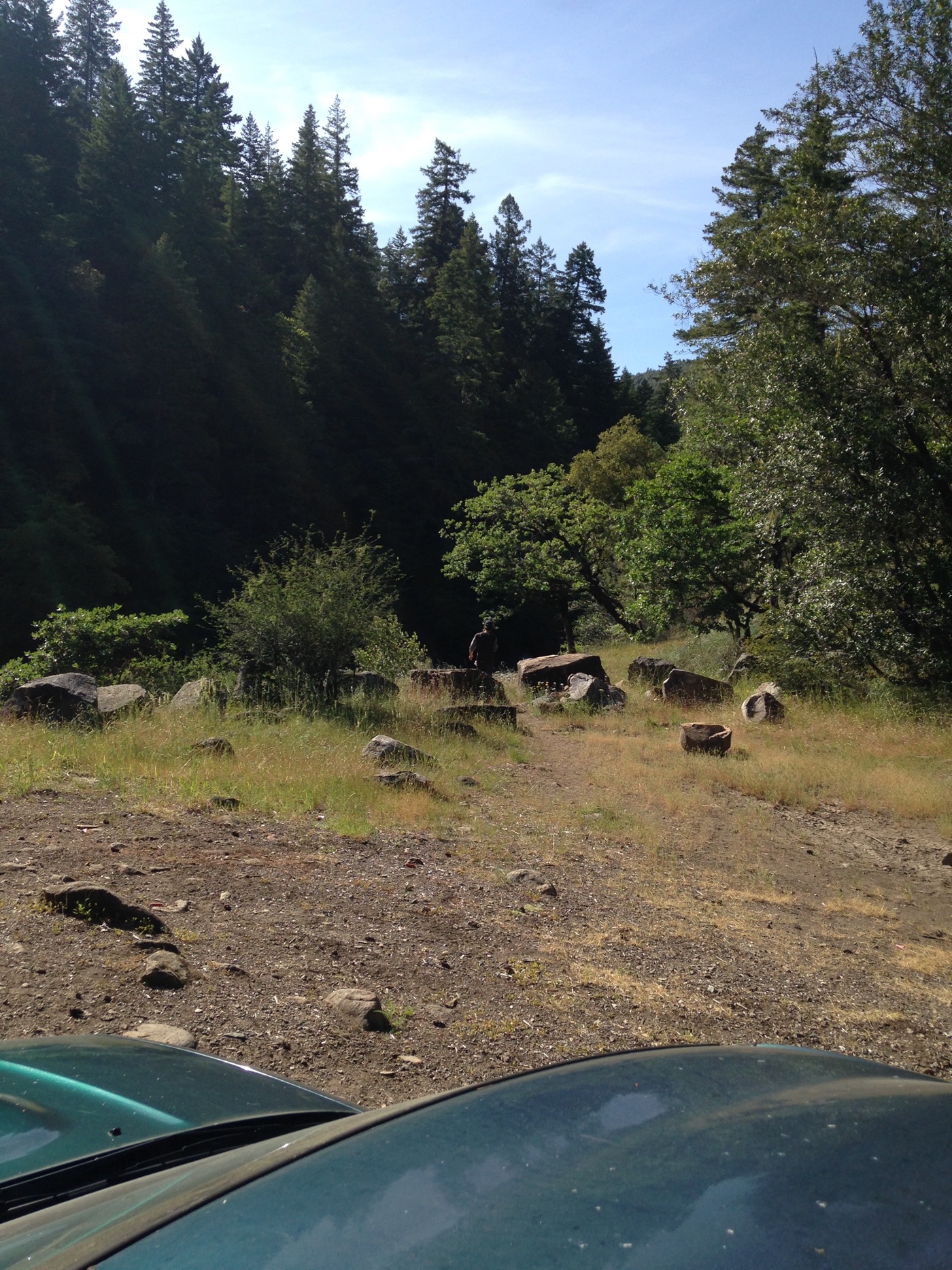 We came to the lower water bridge which was about a 40 foot walk across rocky, knee-deep water. I began wading through the cold water with my boots and pants on. After reaching the other side I set down my gear and checked on the kid’s progress. He was looking for a way across by hopping on rocks. About 20 minutes later, he attempted a crossing only to get wet – which I knew was going to happen. 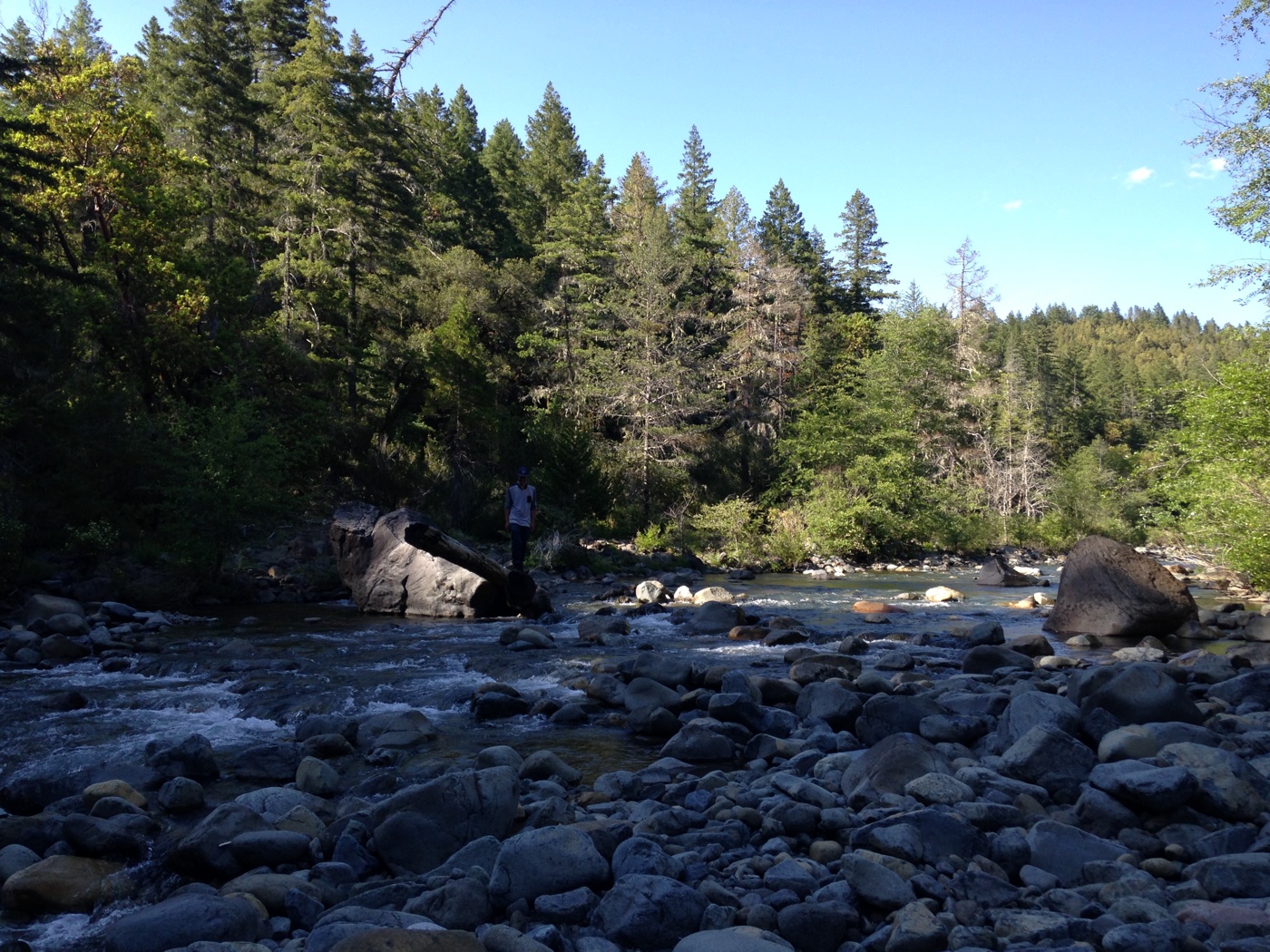 After grabbing the gear, we continued up the road, which for some reason seemed to abruptly end (not sure why we thought this, as later it was clearly a road), but I knew the camp was just over the hill, so we set off directly through the woods. We found a nice pool to stop at, and we set down our gear. The kid relaxed with his feet in the water while I waded out into the water, this time up to my neck, to explore upstream in the hopes of finding the official camp and swimming hole. 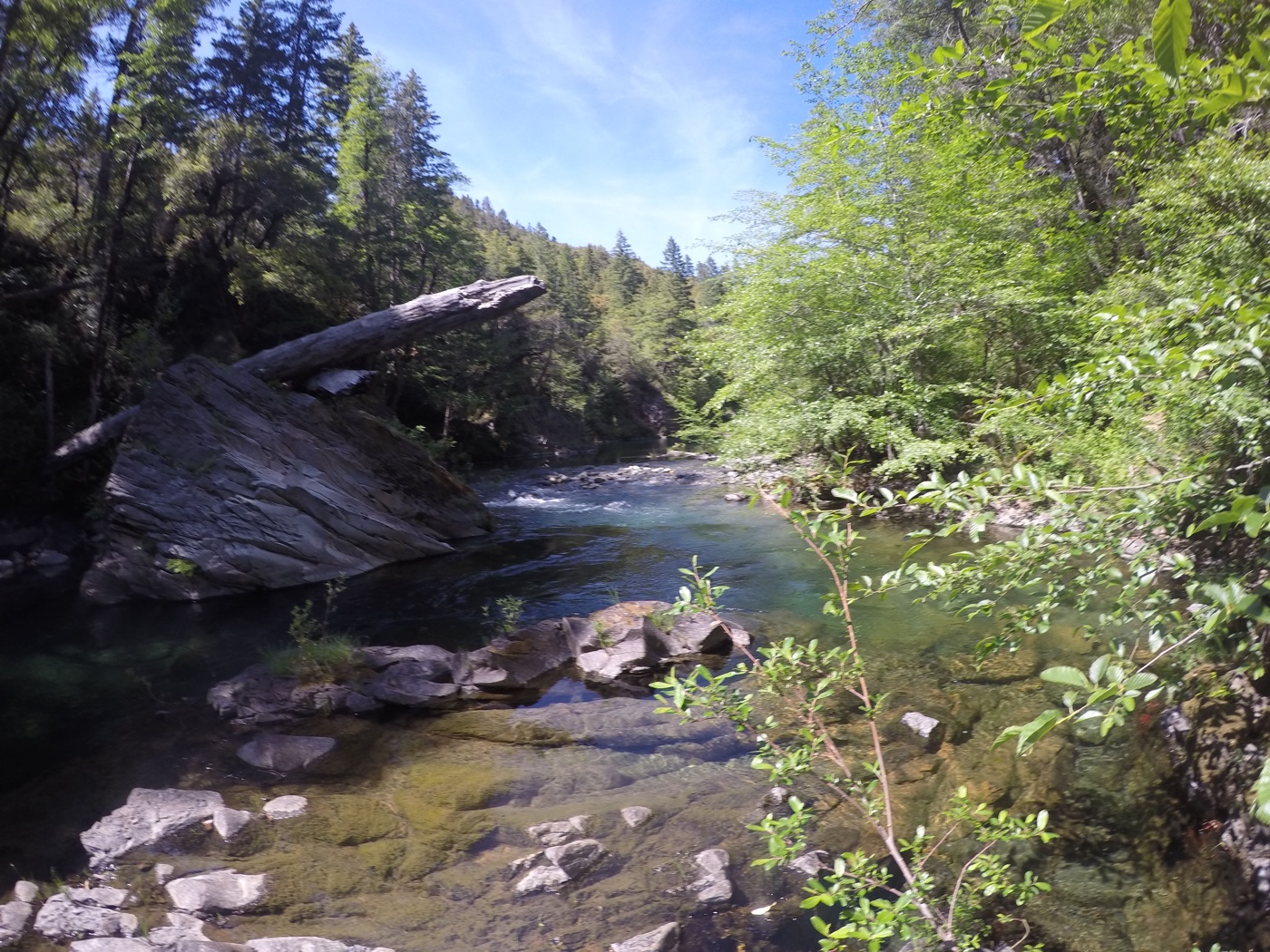 After getting my bearings, I went back and grabbed our gear, and directed the kid through the woods to the official Sourdough Camp —- a large camp, with easy walks down to the rocks around the beautiful swimming hole. Immediately the place grabbed hold of us, and we spent the next four or five hours soaking up the sun and swimming in the clear pool. Unfortunately we had left the drone back in the car, so a successful drone flight would have come later. 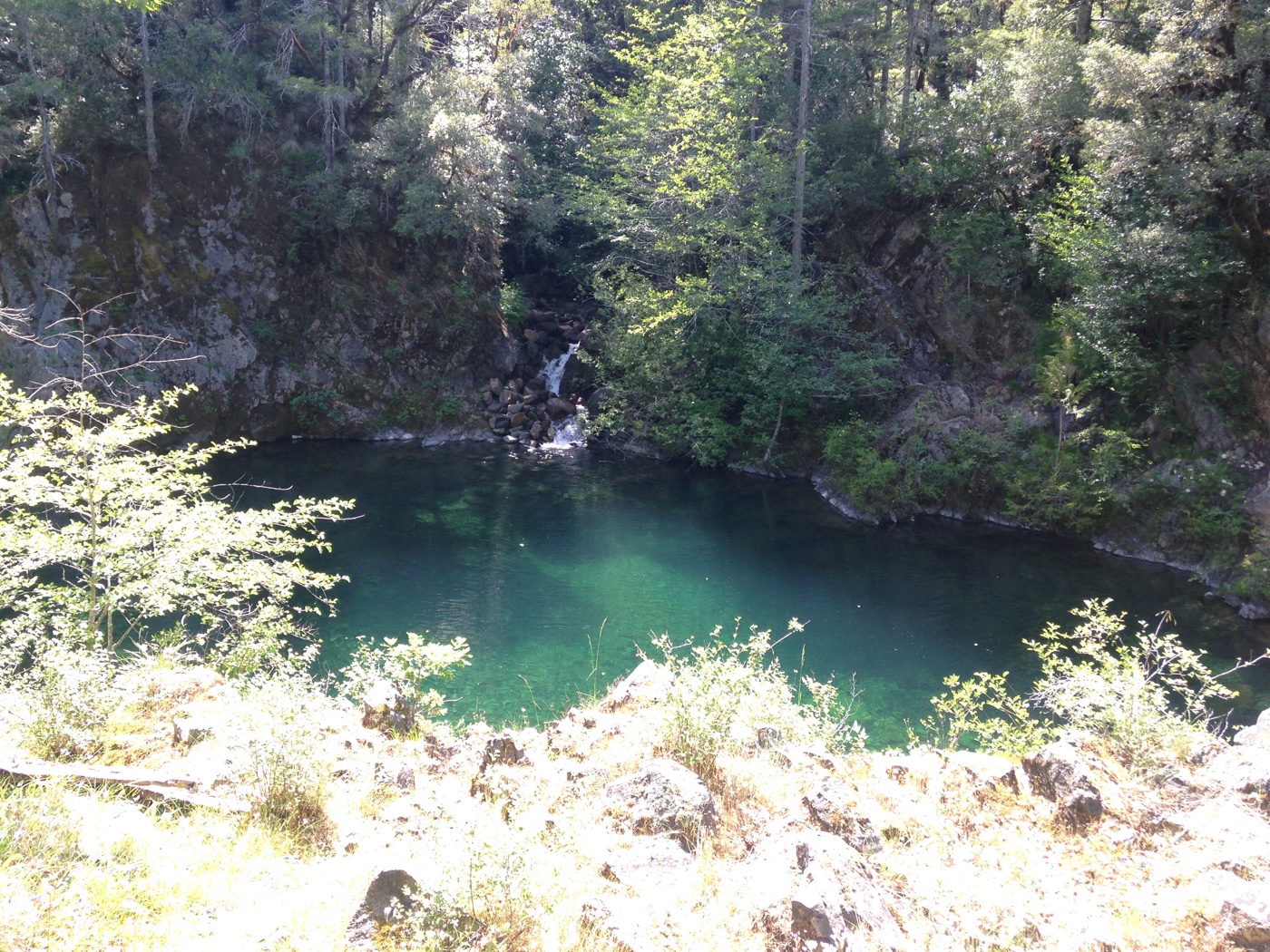 This journey isn’t all about drone shots and hiking, and I was also looking to expose the kid to the healing powers of swimming in the clear (and remote) waters of southern Oregon and soaking in the sunshine on the rocks. This is where you bake in the sun for 10 minutes, then dive into the cold water, and jump out to warm up in the sun again —- repeat for four to five hours, or until you feel better. I captured one of these dives using our new GoPro:

After getting more than our fair share of sunshine we headed back to the car to set up the drone. This time when we came to the low water bridge the kid immediately walked through the water, having quickly shed his previous inhibitions involving wet shoes and pants. We sat and ate some lunch, and then we prepared the drone for flight. The kid flew the drone up both forks of the Smith River, getting some pretty good footage, even though the lighting wasn’t quite right in the canyon that day. 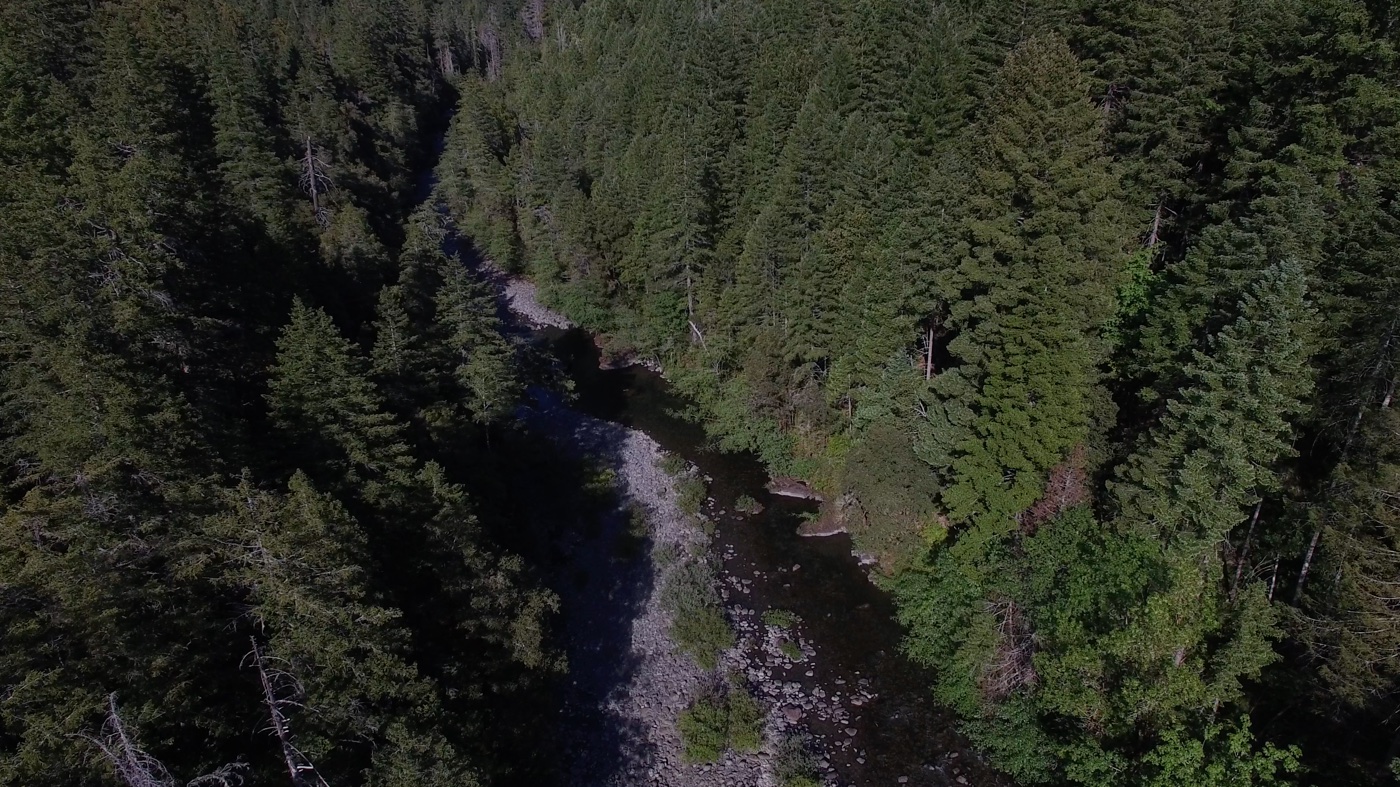 As the sun went behind the mountain, we made our way back to Brookings, Oregon to the hotel room we had rented. We had a car appointment that morning, which allowed us only to spend the second half of the day up at the camp. When we awoke the next morning I presented two hiking options, but the kid asked if we could go back to Sourdough Camp — he liked it there. I said “sure,” and we headed back up the long bumpy road, to the spot at the corner of the Kalmiopsis Wilderness. 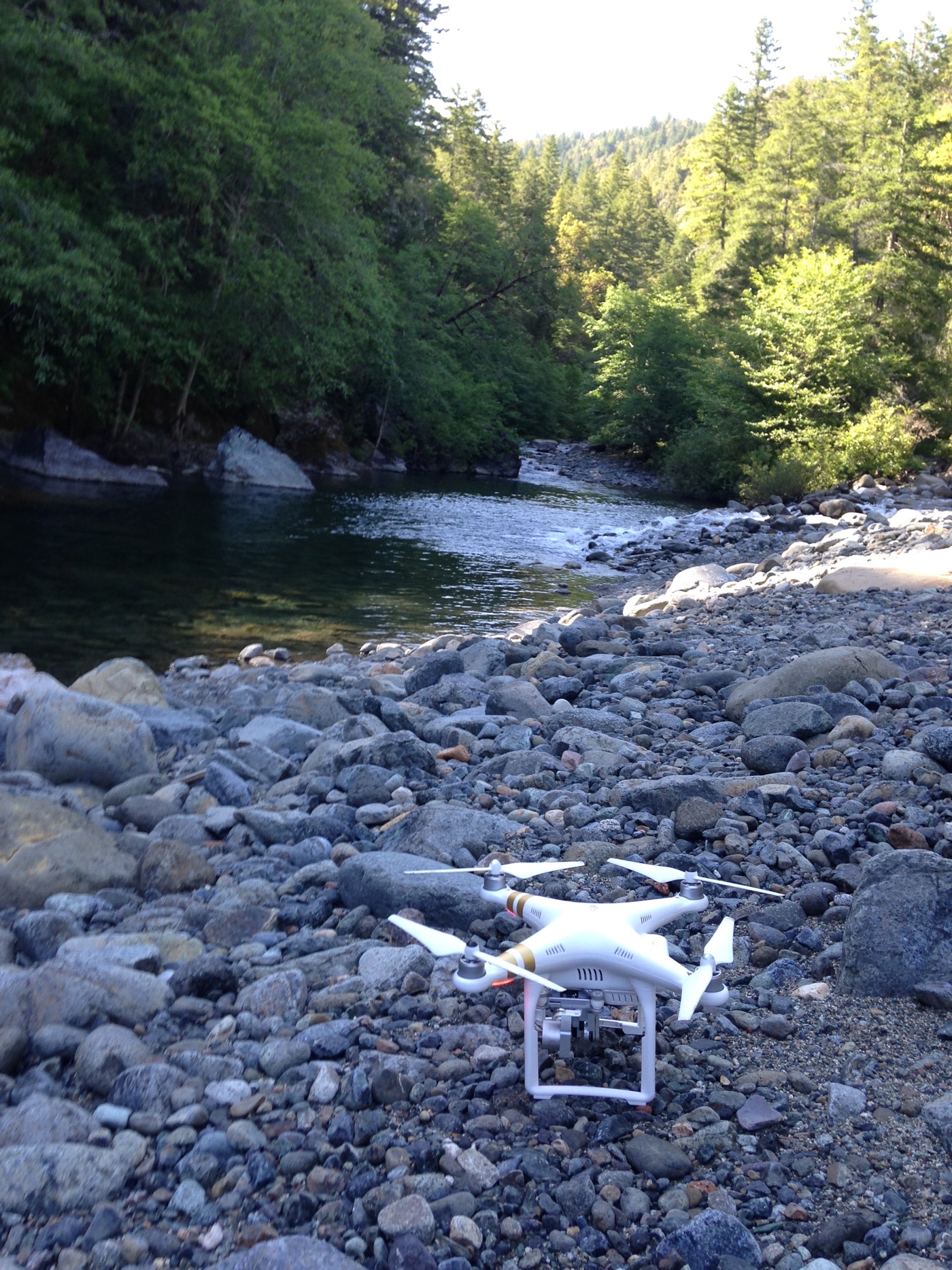 The second day was pretty much a repeat of the first day. This time we flew the drone first, taking advantage of the early afternoon sunlight in the canyon, but then we happily spent the rest of the time soaking in the sun and swimming in the crystal clear pool. While the kid felt the water was “a little colder than he preferred,” I dove in more times than I could count, keeping myself cool in the hot sun. 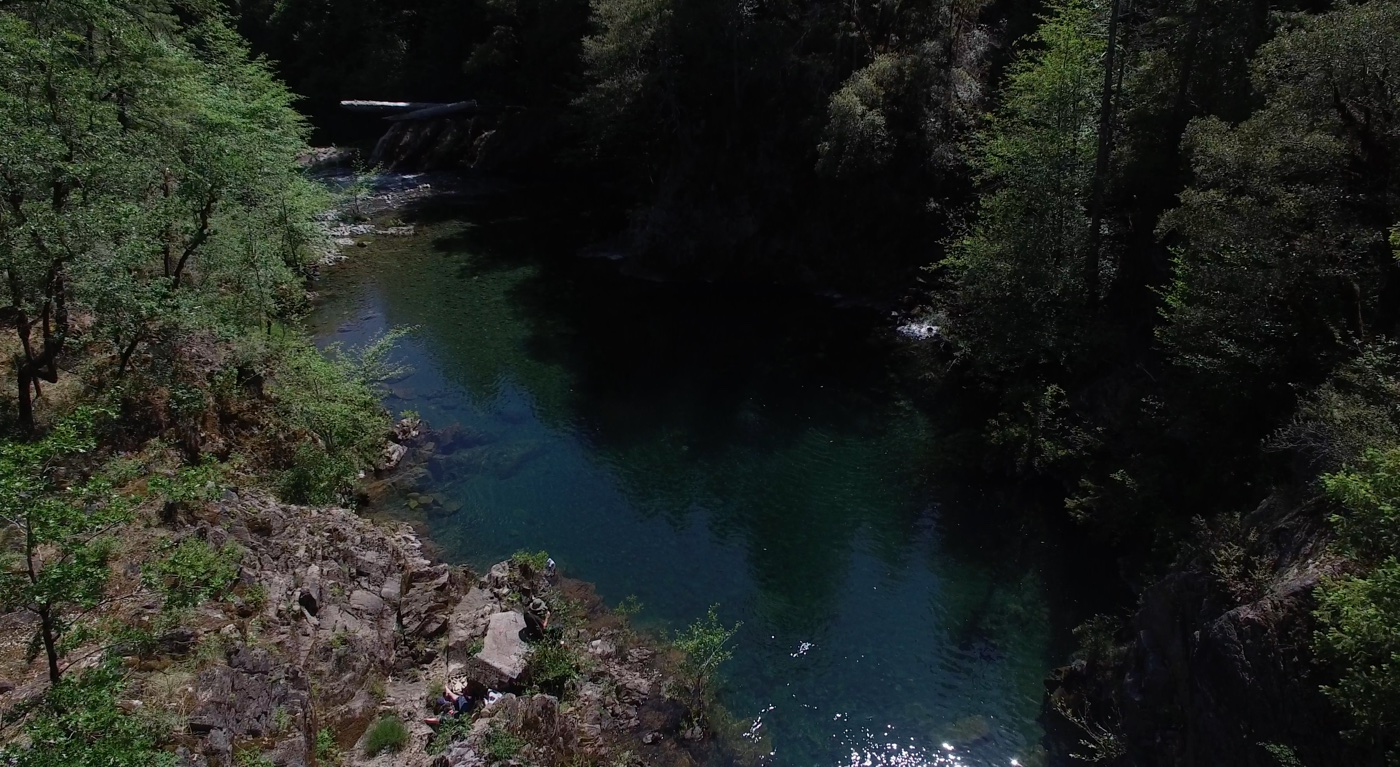 Like Diamond Creek, Sourdough Camp was more about capturing drone footage and sitting alongside the river than it was about hiking. Both these places possess some very powerful healing powers. Whether it is the remote locations, the crystal clear swimming holes and waterfalls, the sunshine, or just the whole package, these places are simply good for the soul. Both places made an impact on the kid – they’d similarly done so for me decades earlier – making the week-long wilderness journey a success.

(You can also view the drone footage and see more photos from Sourdough Camp.)