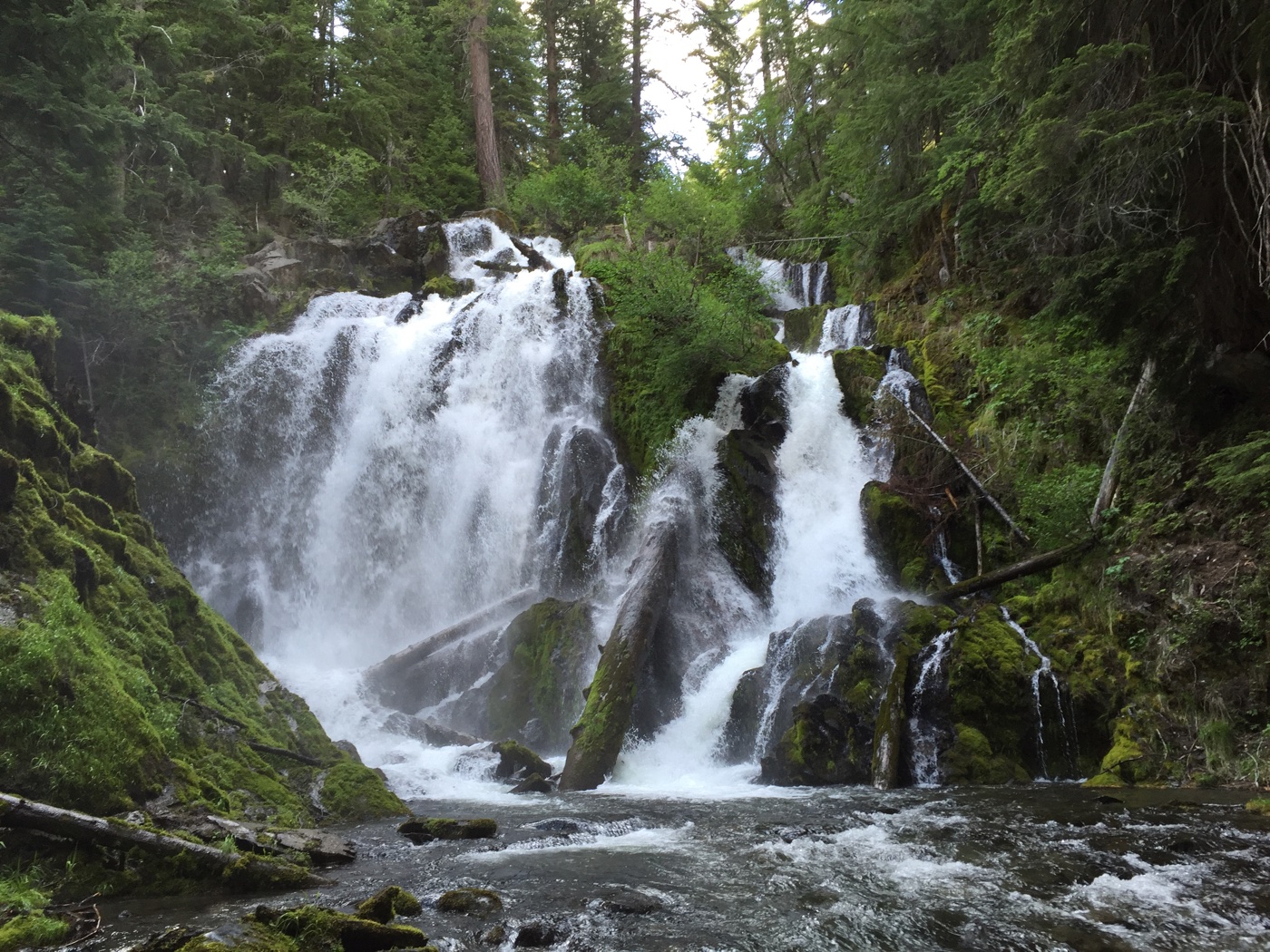 On this day I deviated from our regular plan of hiking in order to head up to Crater Lake, as neither Audrey nor the kid had ever been. I;m not writing a blog post on Crater Lake, because while it was beautiful, there was no drone footage nor was there any substantive hike to document. You can see the pictures via the Drone Recovery Flickr account.

Heading back down the mountain from that excursion, I saw a sign for National Creek Falls. I jumped at the opportunity for a short hike, and I was hopeful at the possibility of some drone footage.

As we were speeding down a straight stretch of the road a big cow elk jump out of the trees right in front of us, zigged and zagged across, and into the woods on the other side. Luckily I saw the animal in time to brake, because it would have totaled the car if we’d hit her.

We reached the parking area at the trailhead and made our way down the hillside to the creek below. The hike wasn’t that bad, and the forest was lush. The only downside were the mosquitoes, which were as big and bloodthirsty. Audrey has been cursing all the bites ever since.

When we reached the waterfall we all started taking pictures, and I got to work setting up the drone. As soon as it was ready for take off I took it as high as I dared in the wooded canopy, and backed it off as far away from the waterfalls as far as I could. Then I handed the controller to the kid.

I waded into the water to get a better shot of the falls with my camera when I looked up and saw the drone driving towards the mist of the falls, caught in the winds that were created by the falling water. The drone was surely headed for a tree. Before I could say anything the drone hit a branch, flipped over and came crashing down on the rocks, busting into several pieces and landing in the water.

I lost my shit and yelled “What were you thinking!” at the kid. I really wasn’t mad about the drone, I was mad that he had taken it so close to the mist after I’d told him to watch out, and that he’d seemingly given up controlling the drone once the winds had grabbed it, even before the it had crashed into the tree branch.

I grabbed the drone, mount, camera, and propeller pieces and put them into the case and marched back up the trail at a furious pace – that speed was partly to get away from mosquitoes, but also to work off my temper. Halfway up the trail I tried having another conversation with the kid, but he just rolled his eyes at me, which only pissed me off more.

The kid was rattled. I was pissed. We all loaded in the car and made our way back to town in silence. As we approached Medford I made the decision to not miss a beat. I stopped at Best Buy, and I bought another drone. I explained to the kid that it sucked big time, that I was done being mad, and we needed to move on. It took him a lot longer to do so than it did me, I think.

We all knew this was coming. Did I handle it as well as I should have? No. But I wanted it to be a shock for him. He had been flying the drone, pushing the limits for weeks now, getting more daring with his flights, not showing much restraint or concern for the physical drone itself.

It was an intense day, and it would be four or five days before the kid wanted to fly the drone again. I feel like it was an important lesson, and in some ways, this is one of the reasons why I picked the drone to be part of this recovery process. I felt that it would speak to the gamer in him, that it was something we could do way out in the woods, and that it would help reconnect him with the physical – both the wilderness and the drone itself.

I’ll explore my thoughts on the drone, his detachment and frustration, as well as my anger in future blog posts. National Creek Falls was a very beautiful, yet traumatic experience, and I am glad we have the day behind us. I knew it was coming all along, but after having a series of “hard days” of hiking, crashing the drone was tough for the kid and for me to deal with.

(You can view more photos from the hike here. We’re hoping we can recover the data from the broken drone in order to retrieve the video footage.)