Since Nevada, the kid and I have been the only two on the trail, but this week we picked up Audrey from the airport to join us. I wanted to find a “quick and easy” hike for her to do with us. I chose the short Rainie Falls hike at the beginning of the Rogue River Trail outside of Grants Pass. 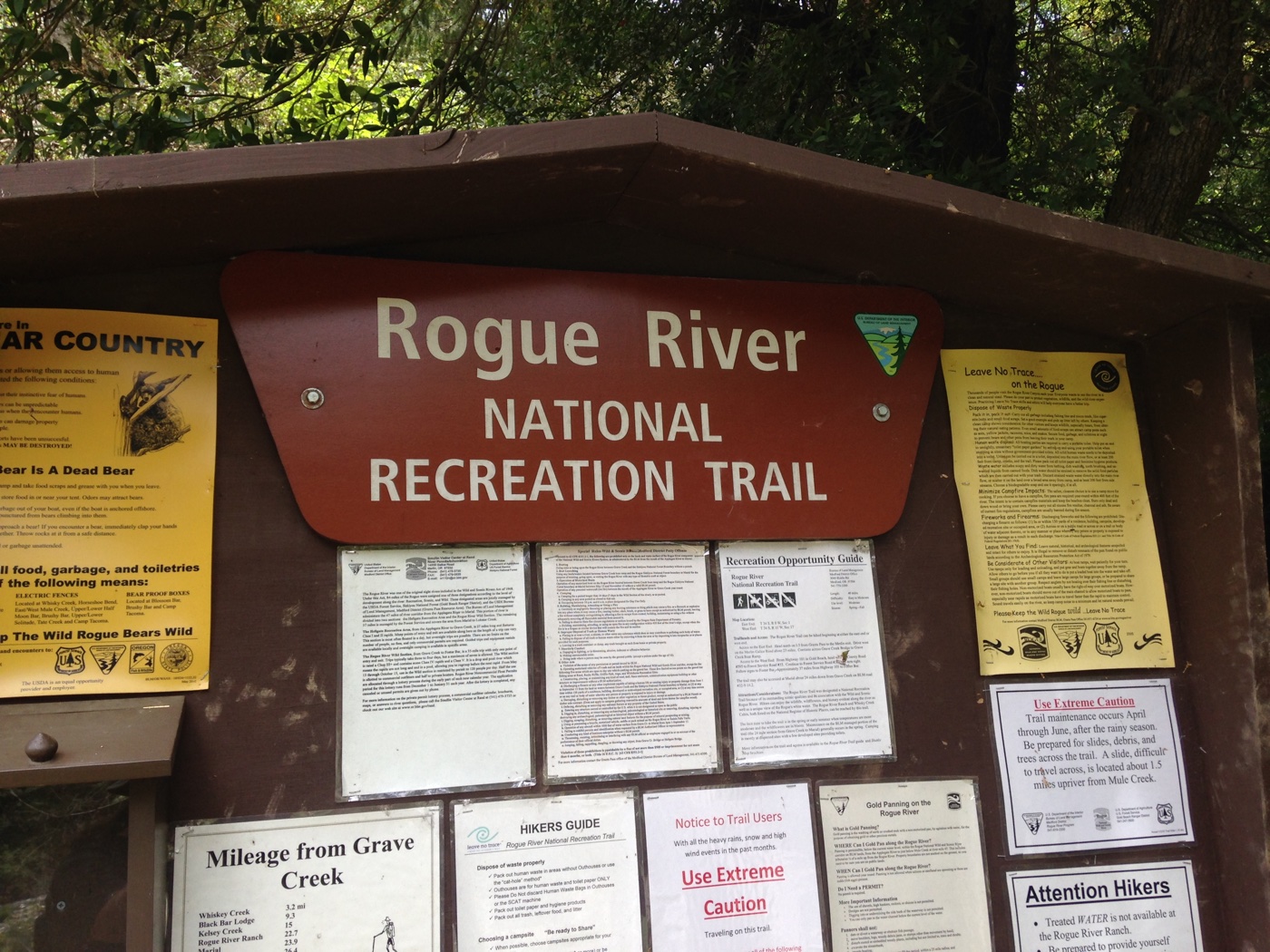 We are planning on doing the whole forty mile trek in coming weeks (once we are in better shape), but this day, we only did the shorter two mile hike to Rainie Falls. The hike ended up being over five miles roundtrip, and was a little more eventful than I had planned for Audrey on her first day with us. 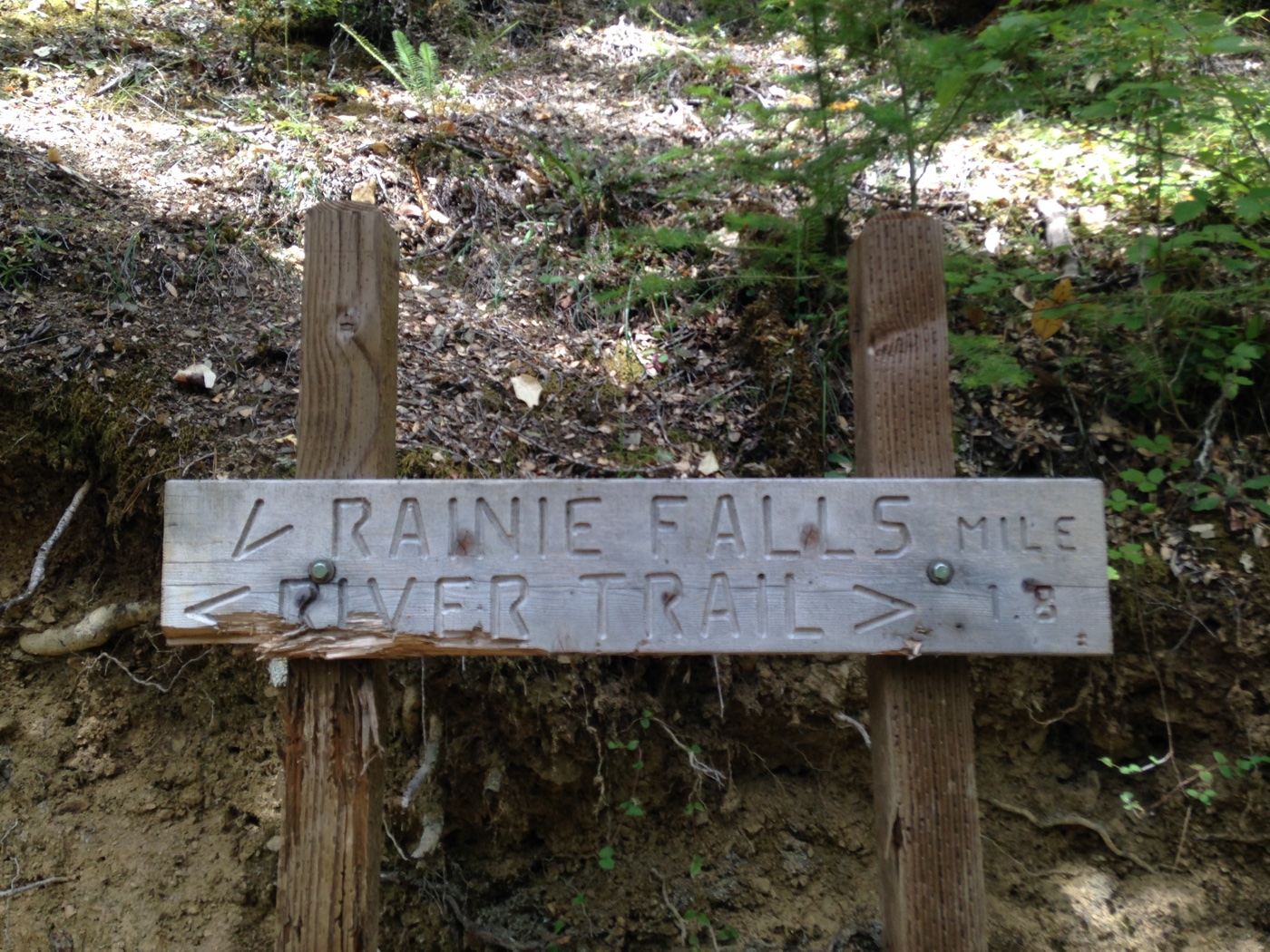 You start the Rogue River Trail at the Galice boat landing, which happens to also be the place that rafters, looking to float that same forty mile stretch, begin their two to three-day trip. 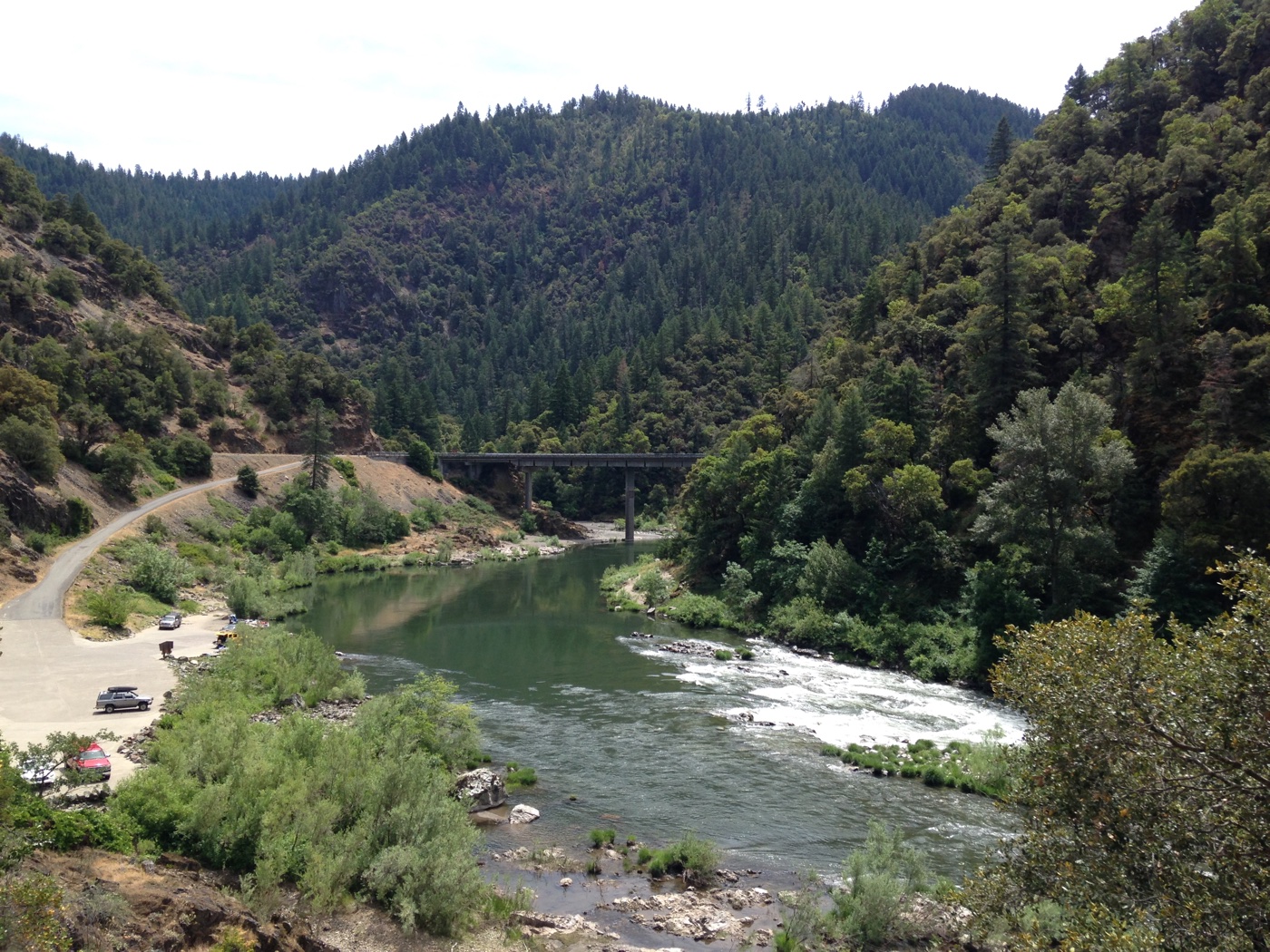 The boat landing and the trailhead mark the beginning of the “wild and scenic” portion of the Rogue River – a rugged yet beautiful stretch of river flowing all the way to the Oregon coast, ending its journey at Gold Beach. 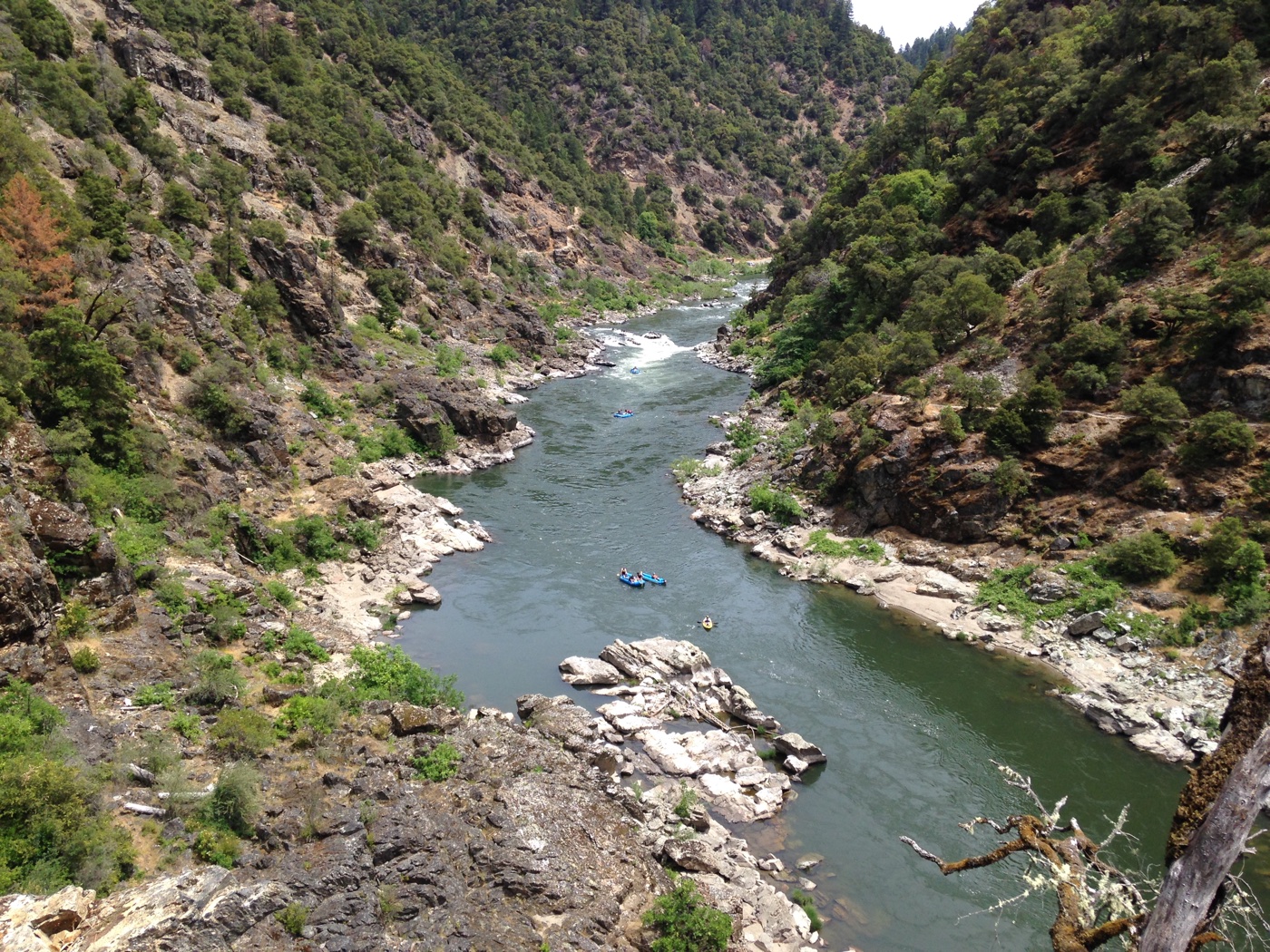 The trek to Rainie Falls isn’t the most difficult trail the kid and I have seen, but it is pretty rocky and fairly narrow, and it has some inclines, making for probably not-the-best choice for my first Oregon hike with Audrey. 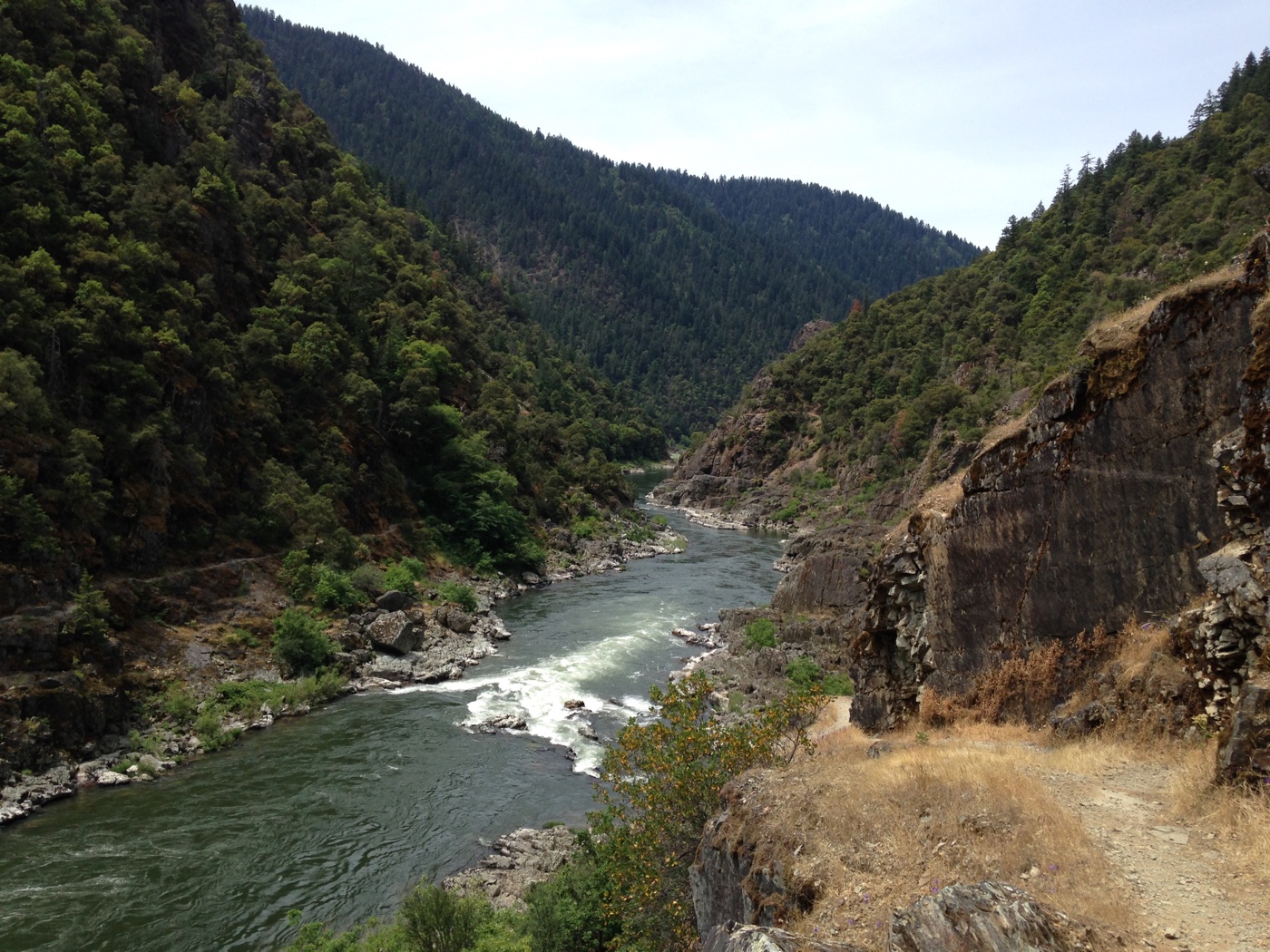 The Rogue River Trail is full of landmarks, and one of them I find fascinating is the high water mark from the 1964 flood when river levels reached levels that haven’t been seen since.

Overall the trip in was pretty uneventful, and once we reached the falls I got to work setting up the drone and clearing a landing pad. The footage we ended up getting isn’t that great as we had broken the protective lens of the camera the previous day at Kerby Peak, resulting in a distracting sun reflection in both the video and camera shots from the drone. 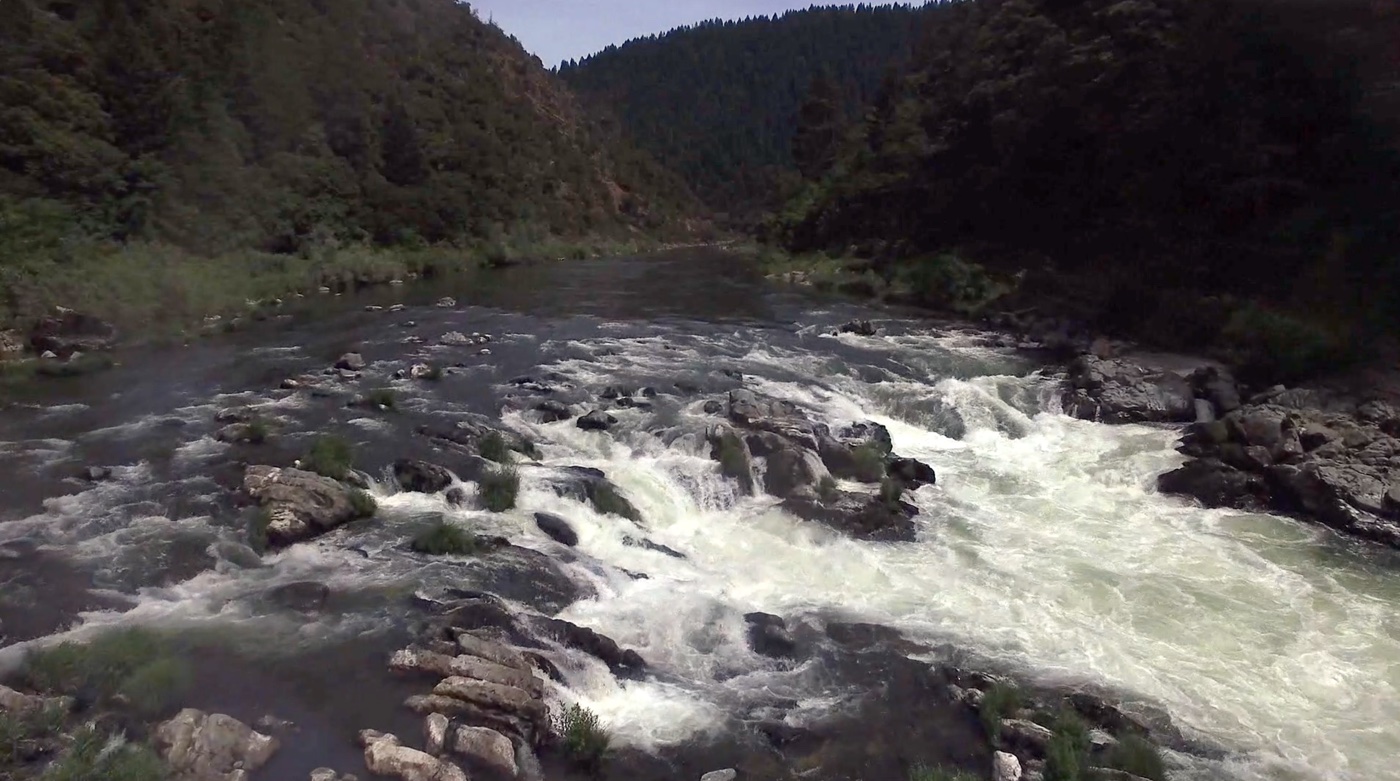 The kid is getting more precise with his flights, and we were done with the flight within about fifteen minutes, so we began our trek back.

This part of the trip is where things got a little bit exciting as I heard a pretty loud rattle by my right foot about halfway back on the trail. I looked down and saw a rattlesnake coiled up at the side of the narrow trail, making me jump about three feet forward.

Luckily Audrey, who is terrified of snakes, was far enough behind me that she was in no danger of being bit. The only stick I could find was too short to take on the snake, so I decide to convince it to move along on with some hefty rocks. I quickly grabbed three rocks, and with the third one, was able to convince him to slither on down the hill. When he unwound from his striking stance, I could see he was about three feet long.

I do not have a problem with rattlesnakes. My biggest concern, to be honest, is that I’m about 75% deaf. Luckily this particular encounter was on my good side, because I definitely heard him before I saw him. If he had been on the other side I may not have heard him at all. It’s a concern, but not something I’m going to let impact my hiking this summer. I will just make sure I am keeping an eye out at all times.

While it wasn’t the best first hike for Audrey, it was certainly eventful! I’m looking forward to doing the full forty miles of the Rogue River Trail soon. I’m guessing it will take us about three or four days to complete. I used to do the trip in two days when I was a teen, but I’m thinking we’ll be a little slower.

Make sure you keep an eye out for more photos and videos from the rest of the wild and scenic Rogue River. It is full of amazing destinations.

(You can also see more photos and videos from our hike to Rainie Falls.)